By: Dewy Sacayan and Richard Deane

Auckland Council has proposed the Long-Term Plan (LTP), less-technically known as the Recovery Budget, which outlines how the Council will spend a total of $31 billion between now and 2031. It focuses on four main levers of key existential issues in Tāmaki Makaurau: transport, housing issues, climate budget and rates.

While having a budget plan is desperately needed to address the issues we face, Generation Zero calls on Auckland Council to make the necessary changes required for the LTP to reflect our climate obligations. See the bottom of the page to complete our quick submit! 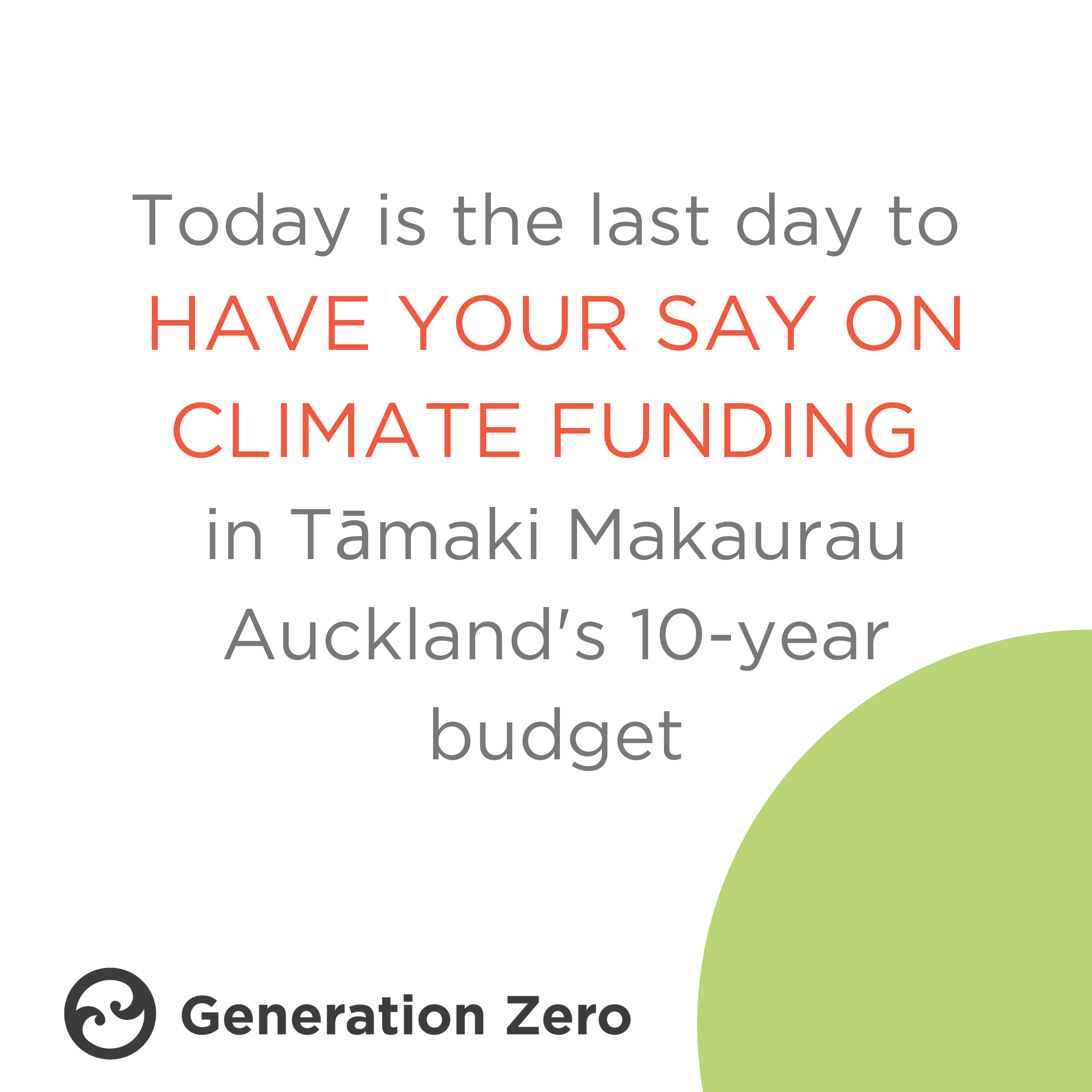 What is the proposed plan?

The good news is that the LTP will invest $500 million in Tāmaki Makaurau public and active transport, particularly focusing on the Urban Cycleways programme, Wellesley Street bus services for when the City Rail Link opens, and the airport-Botany rapid transport link. Auckland Transport calculates that the current transport projects will decrease Auckland’s transport emissions by less than 5% by 2030, which is nowhere near what we need.

The bad news is that these well-intentioned proposals will be overshadowed by another plan: the Regional Land Transport Plan (RLTP), which includes the Auckland Transport Alignment Project (ATAP). ATAP includes expensive, unnecessary, and urban sprawl-inducing projects, like Mill Road. The even worse news is that ATAP will undo the little emissions decrease that the LTP will create. Alarmingly, with projects such as Mill Road, our transport emissions will actually increase by 6%.

Confusing constituents is the bane of bureaucracy and the disconnect between LTP and ATAP is just the start. Other key plans, such as the imminent RLTP, the Auckland Climate Action Plan, and the Climate Change Commission’s advice must all align, otherwise a decarbonised transport budget plan will be reduced to nothing but wishful thinking. We do not have time for wishful thinking.

Like a Venn diagram with circles just not quite meeting each other, Auckland Council and Auckland Transport (along with other government agencies responsible for the emissions budget) need to start working together to ensure that the goals the central government sets can be achieved through their plans, and that plans can be implemented through realistic budgets.

As a Council, this means setting targets with Auckland Transport for reaching emissions targets through public and active transport. It also means working with communities and Auckland Transport for transport initiatives they can pilot, such as tactical urbanism (e.g. pop up bike lanes and low traffic neighbourhoods). Finally, to reduce risks, Auckland Council should probably set some budget for lawyer fees if they fail to reach these targets.

We’ve heard it insultingly simplified - if we stop eating avocados on toast, we will solve the housing crisis. This outdated and unfunny stereotype only deals with housing unaffordability; sadly the problem is much bigger than that. On top of house prices increasing exponentially, previous zoning rules have caused Auckland to grow into a sea of detached houses on large plots, leaving residents no choice but to buy further and depend on cars for transport. This grim system of housing unaffordability, urban sprawl, and car dependency ultimately lock us into a high emissions lifestyle.

Demand for housing will continue to grow, so Council must invest in infrastructure networks in existing urban areas like Northcote and Mt. Roskill. Funding should not be allocated to greenfield development that pushes our urban area further and further out, would cost more, and would be counterproductive to reducing emissions. Action doesn’t necessarily have to be radical as the housing issue requires undoing generations of non-investment and NIMBY mindset will not be solved overnight. Actions like replacing Council-owned carpark buildings with more affordable housing should come as a no-brainer.

Crucially, justice and equity should be centrepoints in housing decisions. The most structurally oppressed communities in Tāmaki Makaurau should be prioritised. Auckland Council must couple the LTP with the full power of the Unitary Plan to enable denser housing, particularly throughout the isthmus, to enable a home for all Aucklanders.

Thankfully, the LTP features an additional climate budget, which includes positive programmes such as tree planting, waste minimisation, bringing forward a zero-carbon Queen Street valley, and replacing half the bus fleet with electric or hydrogen vehicles by 2030.

While this is a start, these programmes are not ambitious enough to truly achieve our climate goals. More importantly, Council’s proposed 5% rates increase, which amounts to $150 million for electrifying half the bus fleet, is like charging $2 for a sausage without offering sauce.

There are many problems to be solved, yet money is scarce. If we are to realistically mitigate the key issues Tāmaki Makaurau currently faces and begin to solve the climate crisis within ten years, Aucklanders need to set the LTP up for success.

There are several ways for Council to get the funding it needs. It could introduce parking levies, which must be ring-fenced for public transport investment. It could also introduce congestion prices. These two tactics will not only help fund the transport plans we desperately need in the supercity; it will also push Aucklanders to use cars only when absolutely necessary.

More importantly, Council could meaningfully increase one-off rates for 2021/2022. Instead of the proposed 5% rates increase, which would only offer a $150 million climate budget, a 5.9% increase will ensure a $320 million climate budget can be progressed. Now before Aucklanders moan and complain, a 5.9% rates increase is actually relatively small if we consider other cities’ proposed increases. Napier and Tauranga are looking at 5%, Dunedin at 10%, and Wellington at between 14 to 23%! If you own a house in Auckland that is priced at $1 million, a 5.9% rates increase amounts to an increase of approximately $40 annually.

Generation Zero believes that a 5.9% rates increase is urgently needed, as it would allocate $320 million towards climate change action. The 5.9% rates increase would double the emissions reduction possible from the climate budget. This would ensure that the entire bus fleet will be electrified by 2030, further invest in tangata whenua-led climate action, address coastal erosion faster, more than double our street tree planting programme to 29,000 in total, allow 600,000 more native trees to be planted, and more.

Let’s do it once and do it right. 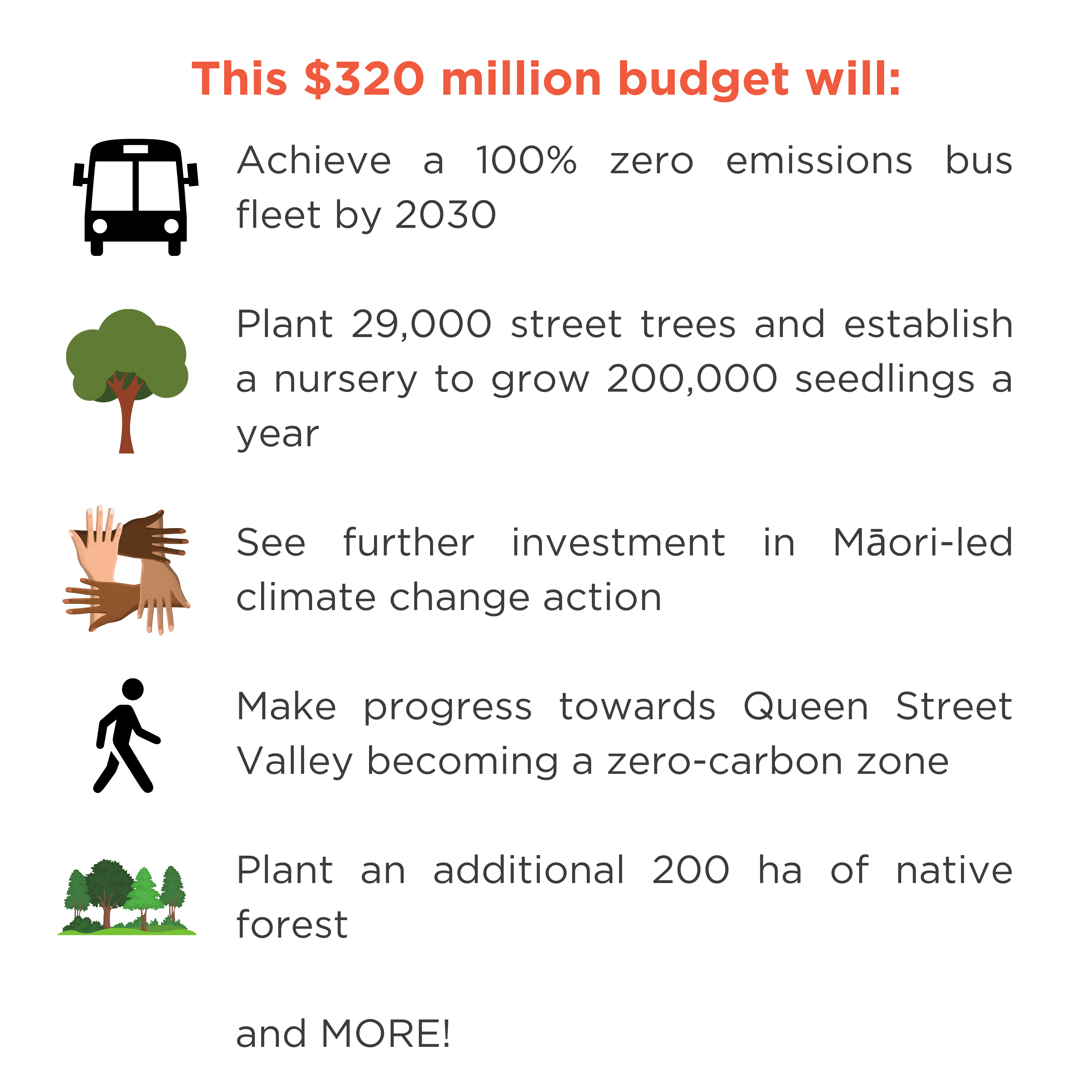 We know times are tough but overall, the proposed rates are a reasonable cost compared to the unimaginably high financial, social and environmental costs of inaction. If Tāmaki Makaurau were to continue keeping its rates artificially low, the financial burden of climate change would simply be offloaded onto young people, lower-income people, tangata whenua, minority groups, and generations yet unborn.

Obviously, the genuine concern that landlords would just pass the burden of rates on to tenants simply highlights and reinforces the need for Council to intensify Tāmaki Makaurau and increase housing supply, as well as for central government to roll out greater rent control and increased social housing.

Council gave Aucklanders until midday today to submit on how our money will be spent in the next ten years. If any of these issues affect you, you should seriously start thinking about making your voice heard in creating such an important budget. You can use Generation Zero’s quick submit form below, for an easy, quick and tangible action.

Addressing the climate crisis and providing a safe and equitable future is achievable. We just need to push decision-makers to think of what’s at stake, especially in the crucial ten-year window of opportunity to act.