A City for People, Generation Zero, and Renters United welcome the cross-partisan announcement today that the National Policy Statement on Urban Development (NPS-UD) will be strengthened with a fast-tracked medium-density zone and its implementation brought forward by a year.

Councils set the rules for how and where new homes can be built. Right now many quality townhouses and apartments are banned across the country. This is because Councils have privileged the concerns of some existing homeowners and property speculators over the voices of people who are experiencing the housing crisis.

Many housing-hesitant councils have taken a conservative reading of the NPS-UD’s requirements and its positive effects wouldn’t have been in place until 2024. This new cross-partisan reform is to be celebrated. It is a vital step to tackling our housing crisis by ensuring people’s right to a quality home is paramount. The real character of our cities are people and thriving communities. 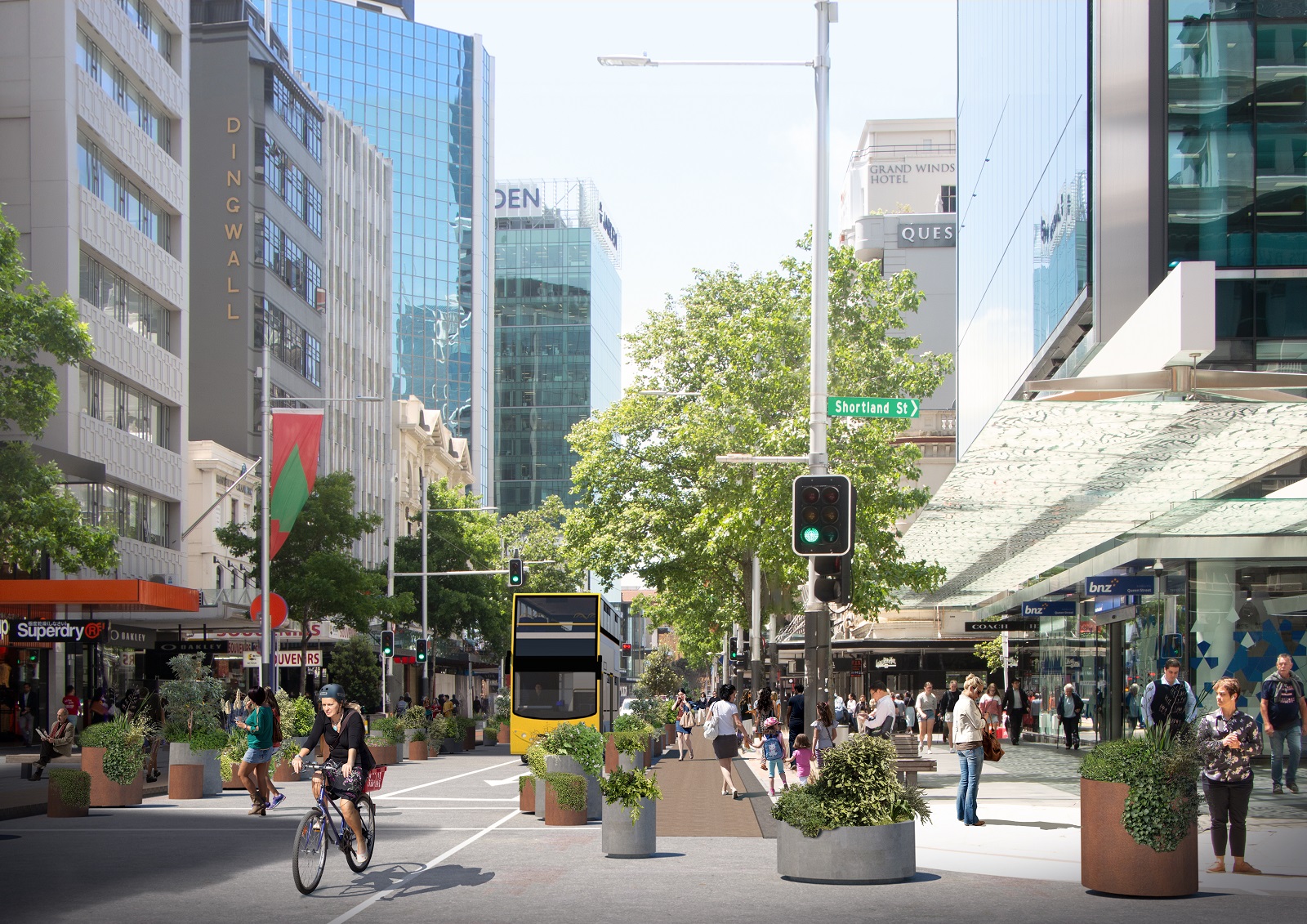 SUBMISSIONS HAVE NOW CLOSED - THANK YOU TO EVERYONE WHO SUBMITTED.

Queen Street has been in the news recently for all the wrong reasons - with a vocal group suing Council for its attempts to make Wai Horotiu Queen Street Valley more people friendly. At the same time, Auckland Transport (AT) are asking for feedback on some proposed Queen Street changes/trials.

You can find out more from AT here. If you're looking for more background context, Greater Auckland have done a few great articles you can read here, and here.

It's important that we show Auckland Transport and Auckland Council that there is support for creating a low-emissions city centre that prioritises travel through active modes and public transport and that we keep pushing for measures that will eventually get us to the Access for Everyone and City Centre Masterplan vision.

To make submitting extra easy we have made this 2 minute submission form - but get in quick! Submissions close Friday 7 May.

Have your say on Auckland's 10-year Transport Plan!

See our submission on the Climate Change Commission's 2021 report!

Climate change advocates have joined forces to apply for judicial review of decisions by Waka Kotahi/NZ Transport Agency and the Government to fund and build an expensive and carbon-inducing roading project, Mill Road.

“Youth spent three long years campaigning for the Zero Carbon Act. This is the year we enforce it and hold the Government to account. The Government simply cannot say it is taking the climate emergency seriously and then fund roading projects like Mill Road,” says Generation Zero campaigner, Dewy Sacayan.

Today, a coalition of climate and transport advocacy groups, incorporated under the name All Aboard Aotearoa, filed a judicial review application against Waka Kotahi and the Waka Kotahi Waka Kotahi in the High Court at Wellington. All Aboard Aotearoa is made up of Generation Zero, Lawyers for Climate Action, Bike Auckland, Women in Urbanism, Movement and Greenpeace with one common purpose: decarbonising transport in Aotearoa by 2030.

Young people throughout Aotearoa have made it clear that urgent action is needed towards an equitable, resilient and zero carbon future, with the latest findings from the Climate Change Commission echoing these concerns. Aotearoa will miss its emissions reduction targets if it doesn't engage in strong and decisive action now.

“We conceptualised the Zero Carbon Act to establish a Climate Change Commission to provide independent, expert analysis of what is needed to get us to a zero carbon future. Now we must follow a path to action as outlined by the commission” says Generation Zero spokesperson Grace Cowley. The report signals that a just, zero carbon future is possible but only if we urgently adopt the budget’s recommendations.

Generation Zero strongly supports the Spatial Plan – and wants the Council to go further in enabling more intensification and upzoning in Wellington. The Spatial Plan as a crucial opportunity to create a low-carbon city that is vibrant and affordable.

“Our current development pattern of pushing people away from jobs and transport links - forcing them into high-carbon lifestyles - is not sustainable if we want to hit our climate targets,” says Marko from Generation Zero.

“House prices and rents are skyrocketing while many people live cold, draughty and mouldy homes that are the worst quality in the country and some of the worst in the OECD. But people have no choice but to take these houses due to the massive housing shortage in the city.”

In response to those calling for less housing, Marko said that “more people in Wellington is a good thing. It means more economic development, shops, community groups, festivals and events. And when you try to say ‘no’ to population growth what you’re actually saying is ‘no’ to all the skilled workers, amazing musicians and artists, creative and driven students and many other talented and diverse people who want to make Wellington home.

The Draft Spatial Plan aims to set a blueprint for more housing as the city grows. “Enabling more dwellings in Wellington through densification, where people want to live, is the one major thing this council can do to curb high prices and rents. This plan isn’t just about planning for growth, but about meeting the housing shortage that has built up over the past few decades and continues to grow every single day.”

Generation Zero also asked the Council to be sensible on heritage and character protection. “The current system of having all seven inner suburbs ban any new development on heritage grounds is madness. The current plan is already a massive compromise – we think that more housing should be allowed than. A narrow view of heritage that only includes colonial history  while people live in garages, inhale black mould and the planet warms is not the way forward.”

“The Spatial Plan is not a silver bullet for our housing woes. But it’s one of the best options we have. A housing crisis isn’t an inevitability. It is solvable and one major part of the solution is passing a strong Spatial Plan.”

Voting with a Climate Lens: what it is and how to do it

We are in an unprecedented time with many challenges to securing a safe and equitable future for all. Especially for young people like ourselves, this upcoming election presents a key opportunity to showcase our resilience and determination to advocate for decisive action towards the future we want and deserve. Voting with a climate lens is an important part of this advocacy.

You'll probably have seen in the news the damage done to the Auckland Harbour Bridge in freak winds last week. It led to reduced lanes and commuter chaos but we saw real leadership by Auckland Transport and Waka Kotahi in creating a temporary bus lane linking the city centre to the Harbour Bridge. It reduces congestion by making buses faster, accessible and more reliable.  We think this could be the beginning of an array of permanent low-carbon, transformative solutions to ease congestion and we are excited to see what else Waka Kotahi and Auckland Transport implement in the future to encourage walking, cycling and busing across Hauraki.

To show our support and thank them for their work we dropped by their offices this morning delivering a plant and a handwritten letter. Read below to see what we said!

The Emissions Trading Scheme Reform Bill is a small step towards a carbon zero Aotearoa, but further reforms are urgently needed to meet the Government’s commitments under the Zero Carbon Act.

The Ministry for Environment calls the ETS “the Government’s primary tool for mitigating climate change”. But this tool is falling short. According to a 2018 briefing by the Ministry for the Environment, we are predicted to fall short of our Paris Agreement commitments by over 200 million tonnes of CO2. This is roughly two and a half years’ worth of national emissions.

“We call on the government to include agricultural emissions and create a clear timeframe for the implementation of a transparent auctioning system for NZUs. These steps will expand the reach of the ETS and give businesses greater certainty in these uncertain times”, says Generation Zero spokesperson Grace Cowely.

“Without these reforms, the ETS will fail in its most important mission; reducing emissions and guiding our society towards a just, low carbon future.”

“We recognise that the COVID-19 crisis has caused significant economic disruption, but we also know the economic and environmental costs of inaction on climate change. Inaction means placing a huge burden on young Kiwis and future generations to adapt to climate change while facing its worst impacts. This is simply unfair.”

“On the other hand, we now have a window of opportunity for visionary leadership for a just transition towards a zero carbon economy. The government must seize this chance and build on the Reform Bill to make the ETS more effective and transparent - for the interests of present and future generations.”

Industrial allocation currently renders the ETS useless for reducing the carbon emissions of large emitters. The reformed reductions to the industrial allocation system remain too incremental. The rate of reduction must be increased in order to meet the targets agreed upon in the Zero Carbon Act.  Moreover, a transparent and traceable auctioning system that removes the fixed price setting for NZUs is needed to incentive businesses that are allocated NZUs to reduce their emissions. We support the Government’s commitment to implement an auctioning system for carbon credits to incentivise businesses allocated NZUs to reduce their emissions, as the system will drive the carbon market dynamics necessary for mitigation. We call on the government to ensure that the fixed cap on emissions is scientifically grounded in order to realistically meet the zero carbon act agreement by 2050. Given the urgent nature of the climate crisis, the implementation of this auctioning system should be fast-tracked.

Agriculture is an important part of New Zealand’s economy, but is also responsible for 48% of our national greenhouse gas emissions. It needs to be brought into the ETS today; not five years from now as currently stipulated in the bill.  In order to meet our commitments under the Zero Carbon Act and the Paris Agreement, we need robust and scientifically validated targets for short lifespan greenhouse gases such as agricultural methane.